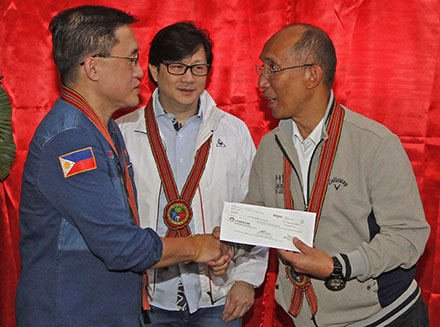 The city government of Baguio has received from the Office of the President the P200 million fund for its sophisticated communication command center that aims to strengthen peace and order, disaster response, and traffic management of the city.

Sen. Bong Go led the turnover of the amount in check, earlier proposed by the city to the OP, during the simple turnover ceremony and re-launching of the Malasakit Center at the Baguio General Hospital and Medical Center Nov. 7.

Go said the fund was promised by President Rodrigo Duterte to Mayor Benjamin Magalong, who proposed the project in line with his “Safer City” project which  combines artificial intelligence to aid the City Disaster Risk Reduction and Management Council and the Baguio City Police Office.

The senator lauded the city’s project, which he said will help synchronize the various functions of the government when it comes to emergency and disaster response such as fire, police, and ambulance for emergency.

Under the Safer City project, high-end CCTV surveillance cameras will be installed all over the city, especially in strategic areas where crimes and gridlocks occur.

The mayor, who is known for introducing technological breakthroughs during his stint with the Philippine National Police, also reported the communication command center has facial recognition capability from the footages or images captured by the CCTV surveillance cameras.

This means that it could alert the BCPO against wanted criminals once the surveillance cameras capture their faces.

The command communication center is planned to be set up at the City Engineering Office compound.