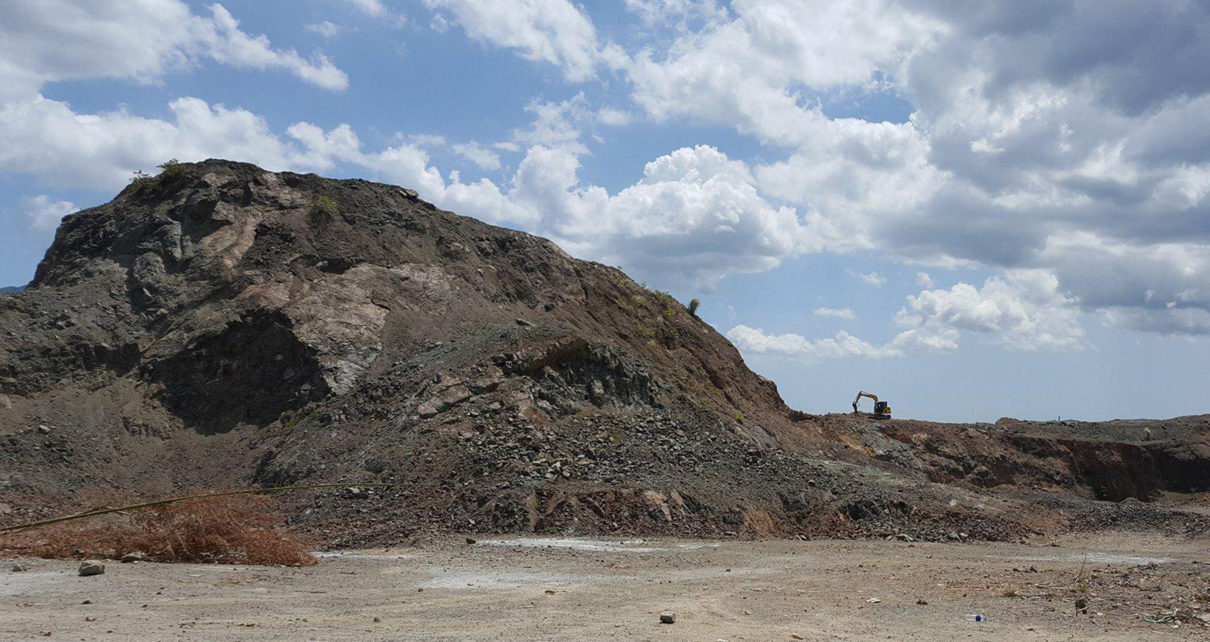 [THE following article is the First Part of the Series. The series is the product of a 2-month research and study conducted under the Philippine Press Institute – Philippine-Extractive Industry Transparency Initiative (PPI-Ph-EITI) Media Fellowship on Digging Stories that Matter.]

TAYSAN, Batangas – “OUR town sourced most of its budget from the payment of taxes and regulating fees of quarries, but we also want our children to see the remaining mountains that we have.”

Thus Mamay Anastacio Curan quipped between sobs as he tends his pigs in their backyard that Friday afternoon.

Mamay Anastacio is a resident of Barangay Sto. Niño in Taysan town, province of Batangas. Very far from the environment full of lush vegetation conducive for farming and for feeding his domesticated animals, his village is now dotted with quarry sites. The hilly and mountainous areas that were towering their community in the past are now flattened and some others are even turn to crater-like image during summer, and become pond full of flood during rainy season.

“We’re born here and our parents lived here. We used to till the soil and sold our produce to support our living, but we are afraid that time will come that we have no more mountains to look up to and soil to till, he added.

But young engineer John Paulo Paz has a different view on the issue of quarrying in Taysan. “Quarrying is good if it primarily brings total development to the affected communities rather than problems,” Paz said.

Paz took note that quarrying industry is more destructive than productive in their town as he noticed the very poor condition of the majority of the road network connecting barangays with quarry operations. Artesian wells turn dry while the rural waterwork system hardly supply enough potable water to the communities.

“For so many years since my teenage years, people here in barangay San Marcelino are experiencing scarcity and sometimes total loss of water supply as the quarry operations in nearby Sto. Niño are cutting the pipelines supplying water in our villages. Most of our neighbors are sourcing their waters needs in our private concrete tank that most of the times we end up losing a supply for our own use. But we could not afford to build a bigger reservoir for our community,” Paz lamented.

Adjacent barangays Sto. Niño and San Marcelino are home to a number of quarry operations in Taysan town.

The town of Taysan lies in the south-eastern portion of Batangas province at some 120 kilometers south of Manila. This town of 38,007 inhabitants based on 2015 census is bordered on the north by Rosario and Ibaan, east by a portion of Rosario, west by Batangas City, and south by Lobo. Majority of its 93.62 square kilometers (36.15 sq mi) land area is mountainous and is known to have copper deposits based on previous studies conducted.

There are several mineral deposits in the province of Batangas identified both by the Mines and Geo-Sciences Bureau and the Provincial Planning and Development Office (PPDO), most of which are non-metallic type concentrated within the Calatagan and Calumpang Peninsulas. Limestone, shale, sandstone and clay dominate the Calatagan Peninsula while clay of various types, gypsum and limestone can be found in Calumpang Peninsula. Lead ore could also be located in the Nasugbu area in the western portion of the province. Extraction of these non-metallic minerals like limestone and clay are usually through quarrying or open-pit mining.

Contribution to the economy

The National Internal Revenue Code (NIRC) imposes an excise tax on all non-metallic minerals, a tax of 2% based on the actual market value of the gross output thereof at the time of the removal, in case of those locally extracted or produced; or the value used by the Bureau of Customs in determining tariff and customs duties, net of excise tax and value added tax, in case of importation.

The Philippine Statistics Authority (PSA) also reported that mining and quarrying has contributed 0.3% in the total 61.9% share of the industry sector to the growth of economy in the CALABARZON Region in 2017.

Meanwhile, the Local Government Code provides that the province may levy and collect not more than 10% of fair market value in the locality per cubic meter of ordinary stones, sand, gravel, earth and other quarry resources, as defined under the NIRC, as amended, extracted from public lands or from beds of seas, lakes, rivers, streams, creeks, and other public waters within its territorial jurisdiction.

Not included in the collections reported by the provincial government is the amount of taxes and fees collected by the national government agencies from the quarrying operation of Republic Cement & Building Materials, Inc. (RCBM) of the CRH-Aboitiz Group in Taysan town. The cement factory maintains a large-scale quarrying operation of limestone and shale in a 321.1700 hectares covered by MPSA No. 029-95-IV under its former corporate name Lafarge Republic, Inc.. Said concession will last for 25 years or until September 29, 2020. Per PH-EITI Report, RCBM has paid the government a total of Php 419,111,863 in terms of taxes in 2016 alone.

Data obtained from the Municipal Treasurer’s Office disclosed that for the fiscal year 2017, Taysan town has generated a total revenue of P117,706,901.74. But the same Detailed Statement of Financial Performance – General Fund was silent as to how much did the municipal government has generated in terms of taxes from quarrying of sand and gravel and other quarry products as the Philippine Mining Act provides that the power to levy taxes on quarrying operations is with the provincial governor (or mayor of highly-urbanized cities), or with the MGB for operations exceeding five (5) hectares.

From the gross revenue generated, it only collected a total of P13,623,544.23 in terms of business taxes that includes Mayor’s Permit issued to quarry operators. The same document also disclosed that Taysan’s share from the national wealth amounted to Php 93,841,912.00 in the form of Internal Revenue Allotment (IRA).

The Task Force said the Maptan Corp, owned by the Portugals, were traveling without the necessary transport permits required by the mining law.

Police report revealed that task force member Juvy Fabicon was hit in the head and kicked in the stomach by then Mayor Portugal while Roberto Miagao was hit on the left shoulder by the former mayor. The said task force personnel were holed up in the company’s motorpool area.

Through the intervention of then Taysan police chief Sr. Insp. Simeon Aldovino, the Portugals eventually released the police and provincial guards with their firearms after an hour of negotiations. The Portugals reportedly asked for the release of the trucks instead of having them impounded in exchange for the release of the law enforcers to which the town police chief heeded. After this, the provincial police director relieved Aldovino from his post.

In November 2017, the Mines and Geo-Sciences Bureau (MGB) – Regional Office IV-A  in coordination with the National Bureau of Investigation (NBI) – Environmental Crime Division raided an alleged illegal quarry operation in Brgy. Sto. Niño. The team apprehended the backhoe and other heavy equipment operators of Maptan Construction and Equipment Rentals, Inc. caught in flagrante delicto in the site. Also arrested were the four drivers and conductors of trucks loaded with quarry materials. Per MGB assessment, the quarry has been in operation about 10 years already and no less than 20 trucks loaded of materials are being transported out of the site on a daily basis.

Lawyer Eric Nuqui, NBI-Environmental Crime Division chief, said their office has received complaints from among the residents of an alleged continued quarry operation without valid permits and leaving only less than a half of a mountain towering their area.

The operation resulted in the confiscation of all the heavy equipment found in the site and had the whole area ordered closed. Operators of heavy equipments and other personnel caught in the area – Nicolas Amul y Garcia, Mardie B. Rubio, Noel A. Evangelista, Raymond Maranan y Lopez, Edwin Luza y Llanes and Jason Pader y Maranan – were arrested and were criminally charged at the Office of the Provincial Prosecutor in Rosario, Batangas for violations of Section 103 of Republic Act 7942 otherwise known as Philippine Mining Act and theft of minerals. The suit, docketed as Criminal Case No. 2018-0242 was then filed at the Municipal Circuit Trail court (MCTC) of Taysan-Lobo, Batangas, but the same was transferred to a Regional Trial Court branch in Lipa City being the designated environmental court in the province. The case is now pending in court and the next hearing is set in June 2018.

However, the NBI is also reviewing the responsibilities of the directors of the company for possible filing of separate charges against them.

Photos taken by this writer in the site last April 6 clearly shows that while the digging has stopped, a backhoe is still positioned in the site pushing downward the aggregates for a dump truck used in transporting the same out of the site which was ordered closed.

A follow-up visit on the site on April 25 again shows the same scene. But the mining engineer of the Community Environment and Natural Resources (CENRO) said that even though he is duly deputized by the MGB to help implement the laws on quarrying, he cannot apprehend one in the absence of a complaint to act upon with since his mandate is to act only in response to complaints filed with their agency. – (To be continued) |#BALIKAS_News