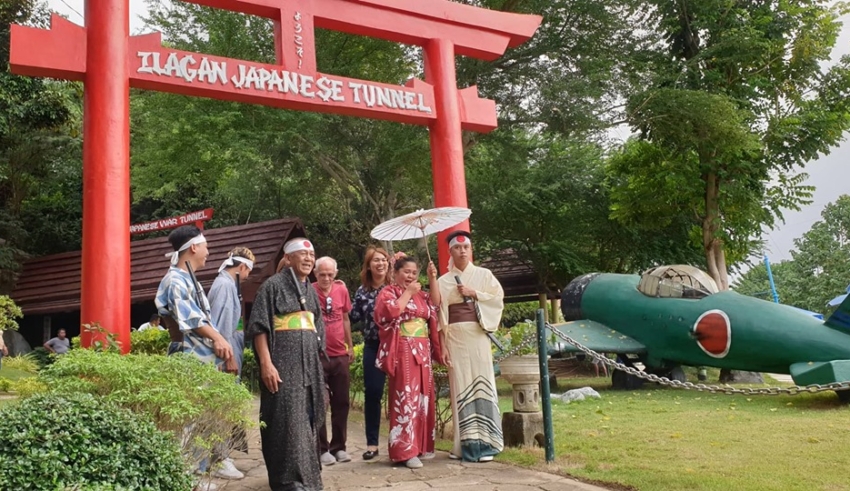 Little girls in colorful Japanese national dress, make-up and hair styles and holding their umbrellas of various hues and colors hurriedly passed me, giggling. In front of a typical Japan welcome arch, some Japanese men and women pose for posterity while young Japanese women are animated on a bridge which water below teems with red Koi fishes. On a carpeted garden, a woman seems to be explaining things to another group of elderly Japanese.

Well, sorry but the Japanese are not anywhere in their country. In fact, these ‘Japanese’ in reality, are tourists and visitors who are on a visit to Ilagan’s Japanese Tunnel, the city’s latest tourism destination these days.

The local government unit of the city has visualized the attraction as a ‘ nationally and globally recognized historical, cultural and distinctive tourist landmark where the past and the present converge.”

Ilaguenos want to position the Tunnel as an important destination for all types of tourists worldwide through aggressive development, expansion and promotions.

Japanese tunnels have played an important role for a country at war with its own neighbors during World War II. It was a hide-out, used as transport shipment and armory and the mobilization of the Japanese Imperial Army. It was built for defense. It is in these tunnels where Japanese General Yokomuki Yamashita allegedly kept Japan’s loot from other countries they conquered.

National and international treasure hunters have fancied these tunnels during the past half century; they have been turning the Philippine soil upside up for possible remnants of these alleged hidden treasures.

A typical Japanese tunnel is made up of various compartments for several purposes; makeshift offices, soldiers’ quarter, dungeons for prisoners-of-war or as presumed repository of treasure loots.

The Ilagan tunnel, believed to be connected with other tunnels in the locality, have been transformed into a garbage pit decades before the present administration of Mayor Jose Marie Diaz decided to turn it into something productive and worth visiting for all its historical and cultural relevance to the Ilaguenos.

Inside this tunnel in Ilagan, passageways, rooms and vintage armaments plus artifacts were discovered, according to a flyer provided by the city tourism office. Old Ilaguenos say the same tunnel has served as a decoy to a bigger tunnel in Barangay Camunatan.

It is believed that the bigger tunnel can accommodate six by six trucks. However, Ilaguenos has yet to discover the Camunatan tunnel. The Ilagan Tunnel is about 40 meters by 3.66 meters wide but has yet to be fully scaled and explored, it added. A watchtower, an important feature of a Japanese tunnel, remains in its old location.

For a first timer, the tourism zone is rather quite impressive. The local government successfully turned a once-forsaken area in Barangay Sto. Tomas into what is now a must-see destination in the Corn Capital of the Philippines.

Once you step in the area, you seem to step on a Japanese village, complete with a typical Japanese garden and signage in Nihonggo. The ‘Japanese’ who freely roam the zone complemented an atmosphere of a real Japanese locale.

The tunnel is located on the right side of a hill which has been turned into a Japanese landscape of stones and plants rolling down into the main entrance. Upon entering the tunnel, the tourist is advised not to take pictures or videos to possibly maintain its aura of history. It was a man-made tunnel constructed from the labors of detained and distressed Ilaguenos during the war.

The guide leads the visitors inside the tunnel which not only showcased artifacts but likewise dramatized the plight of the captives in the hands of their tormentors. Why, an effective sound effects mimicking the cries and agonies of the Filipino captives added to the eeriness of the tunnel. The sounds justify the complete package.

This writer will not dwell on what’s inside so as to sustain its mystery.

The lure of the zone is the wearing of a Japanese Kimono. For a very minimal fee (read Php50), you can wear those colorful Japanese kimonos aside from styling your hair like the traditional Japanese women, with umbrellas to complete the package.

This is optional but the thought of being a “Japenese” in the next few minutes of your life makes it exciting for photo opportunities. In fact, this writer failed to resist such temptation. He donned a Japanese kimono with a Samurai and a head band for an authentic look.

Then, there’s the Furin, the Japanese bells, one of Japan’s most characteristic symbols of summer, hung outside houses, shops and temples. Here, you can whisper your wishes and prayers to the bells before you ring it. The vibrations and sounds caused by the bells are believed to be carried into the heavens.

To complete the package, a Japanese food court has been established. Imagine yourself wearing a Kimono and using a chopstick to devour authentic ramen, takoyaki, gyoza, maki plus other array of Japanese delicacies and cuisine.

All fees are minimal, based on amended ordinance No. 006, series of 2016 to include entrance, rental fees, filming fees and table charges.

With the Japanese Tunnel of Ilagan, no wonder, the city has become the toast of community-based tourism industry in this part of the country.

Turning Japanese? You can, at Ilagan’s Japanese Tunnel right at the heart of the City.