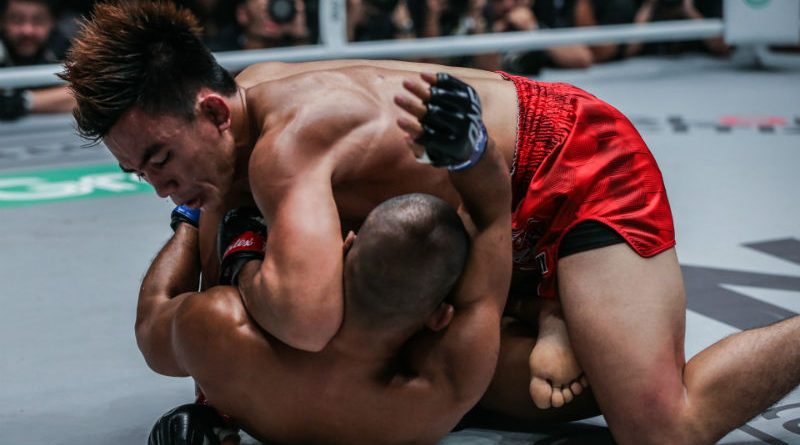 A trio of Team Lakay fighters carried their patented reliable weapon in their backpockets during ONE: Masters of Fate at the Mall of Asia Arena last November 8, 2019 and their bout results were definitely much better this time, unlike many of the gym’s bouts earlier this year.

The spinning kick, a long-time trademark strike move of Team Lakay fighters, was again employed by Joshua Pacio, Geje Eustaquio, and Eduard Folayang during the event, came out victorious against their adversaries, softening several frustrating loses earlier this year.

Robin Catalan, who ushered the good show for the Filipinos, also used this move earlier and joined the list of explosive winners.

“The Passion” was in the ring in this event to defend his ONE World Strawweight Title against compatriot Rene “The Challenger” Catalan.

His first moves included a spinning back kick 30 seconds into the first round that connected solidly to Catalan’s midsection and had him reeling backwards.

That set up a takedown 12 seconds later where both combatants jockeyed on the mat to gain control.  Catalan transitioned to a knee bar during the struggle but Pacio rolled free and recovered the mount.

Both combatants exchanged ground and pound until the bell sounded.

The pair exchanged blows in the opening minute of the second round. Catalan executed a lunging attack that Pacio avoids, caught a body kick and attempted to bring the champion to the canvas.

Pacio, however, connected a knee and brought him instead to the mat. He worked for the submission from the dominant position and managed to secure his arms around the challenger’s neck.

Eventually, Catalan was forced tap out at the 2:29 mark of Round Two in this All-Filipino title fight.

The “Gravity” was the one who made use of the spinning kick as the clean reason to ending his bout.

Eustaquio pulled the move against Toni “Dynamite” Tauru and found its target in the midsection to end the bout via knockout at 2:11 of Round Three.

Round one saw Tauru mimick his technique during their first fight, finding the submission move.

Eustaquio, however, defended against them and got his rhythm going as the second round opens. He started connecting solid punches and kicks against his taller opponent.

He caught a Tauru jumping kick and forced a takedown with a trip. Tauru managed to reverse it but Eustaquio kicked out as the round ends.

By the time the third frame started, Eustaquio exhibited confidence in his stance. He exchanged hits with Tauru without over committing until he found the right time and connected a spinning back kick, 2:12 gone in the round.

A few seconds later after both fighters sized up each other, Eustaquio attempts the same shot and lands it squarely to the midsection and send Tauru crumbling to the mat, forcing the referee to waive the fight.

Clash of heads takes Folayang out, his legs hands him a win

The “Landslide” was up against punch specialist Amarsanaa “Spear” Tsogookhuu in a battle of feet and hands and the veteran Team Lakay fighter gave his 29-year old Mongolian foe a schooling on footwork in the first round.

Folayang connected several of his perfectly timed trademark kicks that included two head kicks that squarely found their target and two spinning ones that also landed solidly, one midway through the round and the other with 22 seconds left.

Folayang’s signature footwork strikes were on full display right from the opening bell up. They kept on finding their target, although Tsogookhuu was a tough customer to take out.

Folayang was on his way to doing the same in the second as Tsogookhuu appears to have found no antidote to the leg attacks when an unfortunate clash of heads rendered Folayang unable to continue the bout.

The “Landslide” was leading on all judges’ score cards and it was past halfway of the bout when the accidental clash of heads occurred. As a result, a win via technical decision was awarded to the Igorot fighter.

The match could have ended in a no-contest if the headbutt occurred during the first half of the bout but the clock showed a second had past the midpoint of the bout when the incident happened.

“The Ilonggo” was up against Gustavo “El Gladiador” Balart in this bout and also relied on his legs against his adversary who tends to use more his hands and grappling.

The Cuban went to his bread and butter move, taking down the Filipino in the first, but Catalan recovered nicely by forcing the action back on their feet.

As the round progressed, Catalan sneaked in some kicks and got the rhythm going as Balart couldn’t defend them.

Some of Catalan’s telling hits in the round include a head kick delivered while he was in the corner and a right straight follow-up that meet an airborne Balart who was lunging.

Catalan ended this round by connecting a spinning back kick.

The second went exactly as the first with Balart taking down Catalan, Catalan rising up to his feet and going with his legs, firing right body kicks.

That eventually setup one that was aimed high and found Balart’s chin. Balart fell face-first onto the canvas to give Catalan a knockout win at 4:43 of Round Two.

With these wins, the Philippines is back in the winning circle and is ending the year full of frustrating loses on a high note.

It was just too bad the situation had at least one of them ending with a loss due to the All-Pinoy strawweight title bout.