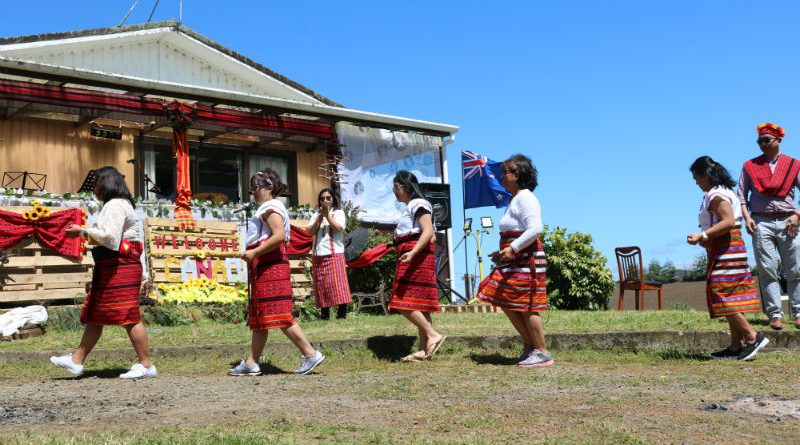 The loud but sweet sounds of beating the solibao and gangsa reverberated across the normally serene farms of Karamu, New Zealand as the Cordillerans of NZ held a cañao last October 26-28, 2019.

According to Myriam Benito, a known elder of the Igorot community who has been living in NZ for two decades, this was the first officially known cañao in New Zealand.

The event was attended by more than 200 individuals who had set-up their camping tents around the vicinity of a lone farmhouse that is beautifully situated on a vast green pasture. This farmhouse is the residence of Rex Sadinas, an Igorot farmworker in Karamu.

The rural location of this farmhouse became suitable for the 3-days cañao since there are no neighbors to disturb, bonfires can be lit at night, and there are wide grasslands for carpark and camping.

This cañao at Karamu was originally a planned gathering of a small group of mostly Cordillerans who are working as builders, machine operators, truckers, farmers, and beekeepers in the North Island of New Zealand. The group calls themselves Fil@NZ.

Since early 2018, members of this group had been arranging some informal gatherings during the weekends and holidays to catch-up with each other. Eventually, through the leadership of Amor Moresto and Beverly Carpio, the group had agreed to organize a more festive gathering to be held on the long weekend, which was on October 26-28, 2019 also called as the Labour Weekend due to NZ’s Labour Day holiday.

Such a few long weekends have been the rare opportunities to hold big gatherings and reunions since most are expected to be free from work. Likewise, there would be enough time to travel especially for those coming from distant places.

Cordillerans from all over New Zealand had been enthusiastic to be part of this event. Notable were those attendees who travelled from Christchurch and Wellington, which are places far south of NZ and about more than a thousand kilometers away from the venue.

With the set theme: “Coming Together for Camaraderie and Cultural Revitalization”, various traditional Cordilleran chants, dances, songs, and performances were showcased throughout the event. The traditional way of the cañao was observed.

The attendees and guests were able to taste the watwat and pinuneg. Despite the absence of the traditionally flamboyant rice wine called tapey, the fruity NZ grape wine was used as a substitute. The attendees were also able to experience sitting around a bonfire while enjoying the breeze of the night. This cañao had been filled with nonstop entertainment.

There had been countless talent and cultural performances from the attendees and guests, which were done individually or in groups. In addition to the daytime program of activities, the evenings until the late nights of the 26th and 27th had been enlivened by the concert of the SideBee band, a popular band of Igorot beekeepers in NZ.

Ultimately, throughout the event, everyone had enjoyed watching and participating in the traditional songs and dances from various Cordilleran tribes. Most of these cultural acts were performed intermittently with the band.

Several known elders and leaders of the NZ Cordilleran community came to grace the event. The Philippine Ambassador to New Zealand, Hon. Gary Domingo, who is also known to have an Igorot Kankanaey descent, was the guest of honor and speaker. The ambassador talked about the importance of maintaining the indigenous culture among migrants and the various concerns of migrant Filipinos in New Zealand.

In the remarks of Moresto, the acting leader of the organizing group, the event is primarily a chance for a get together of migrant Cordillerans, to share their experiences, to connect with their friends, and to give themselves time to relax and have fun, while celebrating their Cordilleran culture and tradition.

Although there are also similar big events that have been occasionally organized by NZ Cordillerans, none of those have been called a cañao. The recently concluded cañao is comparable to the annual Cordillera Day celebration being organized by the OCNZ, where Cordillerans get together while enjoying the richness and uniqueness of the Cordilleran culture being showcased.

Indeed, the success of this first cañao in NZ has been an exemplar, and everyone is looking forward onto the next one in 2020. There are already an estimated 72,000 migrant Filipinos in New Zealand and around 2,000 hail from the Cordilleras.