Several perish in Apayao due to landslide, vehicular accident 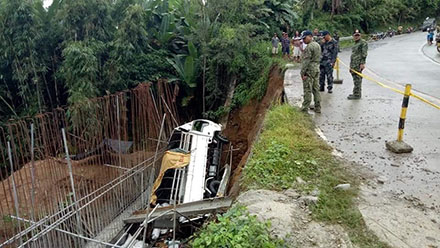 A board member and a policeman in Apayao died in a landslide in Kabugao while 19 individuals perished when the truck they were riding slipped in a ravine in Conner.

Board Member Tolentino Mangalao and Corporal Rommel Gumidam, Jr. perished in the landslide when the house they stayed in at Barangay Dibagat was swept by a landslide Nov. 7.

The Apayao Provincial Police Office reported the victims were about to head to Calanasan when a series of landslides in the area due to the effects of Typhoon Quiel forced them to spend the night in one of the houses in the barangay.

The bodies of the victims were recovered morning of Nov. 8 due to the tough road condition in the area.

Earlier, 19 individuals, mostly farmers, died in a vehicular accident in Conner on Oct. 31 while 21 individuals sustained multiple injuries when the truck they rode on encountered mechanical failure.

Apayao PPO Director Col. Byron Tegui-in said the passengers came from Gagabutan in Rizal, Cagayan where they received farm inputs from the government.

They were on their way home to Lattut, Rizal, Cagayan when the accident happened. They passed through Conner since it was the shortest route to their destination.

While the truck was ascending the road going to Conner Proper, the engine shut off and the breaks malfunctioned, sending the vehicle down into a 15-meter ravine.

Tegui-in said the ravine was not deep, but since the elf truck was enclosed, the victims did not have a chance to jump out of the vehicle, which also contained sacks of palay and corn seeds that may have caused the death and the injuries of the passengers.

Some victims were referred to the Tuguegarao City hospitals for further medical management.

At least 18 of those who died were Cagayanon, while Aida M. Batallones, Allangigan, Conner Sangguniang Kabataan chairperson, was the lone Cordilleran who died after hitching a ride with the group from Tuao, Cagayan.

Apayao Gov. Eleanor Bulut-Begtang expressed condolen-ces to the family of those who perished.

She assured support to the victims and cash assistance to those hospitalized in Conner and Cagayan.

The provincial government of Apayao will also provide burial and transport assistance to the victims.