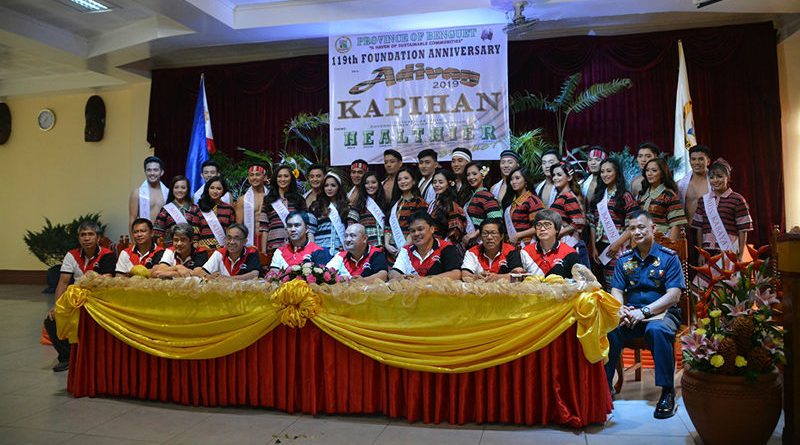 LA TRINIDAD, Benguet – The provincial government has lined up some seventy three activities for the month-long celebration of the 119th founding anniversary of the province and Adivay festival next month.

The month-long events fired off Thursday with the press presentation of the candidates for the Search for Mr. and Ms. Benguet wherein the members of the media were given a chance to select the Darling of the Press.

The theme of this year’s festivities is ‘HEALTHIER Benguet’ considering that the events that have been prepared were a mixture of health and wellness, livelihood, human resource development among others that focuses on the priority programs of the administration of Gov. Melchor D. Diclas.

The programmed volleyball invitational tournament will open on October 29, 2019 that will be followed by the conduct of a medical, surgical and dental mission on November 4-5, 2019

The 119th Benguet Anniversary and Adivay Festival will formally kick off on November 6, 2019 wherein the day will start with an ecumenical service followed by the kick off program and the pre-pageant for the Search for Mr. and Ms. Benguet.

On November 7, 2019, concerned officials will participate in the Amazing Race that will be conducted while the traditional mass wedding in the different municipalities that will be administered by the local chief executives will be held on November 8, 2019.

Sports events such as the sepak takraw and bodybuilding and men’s physique competition will be conducted on November 9, 2019 while the opening of the trade fair and Acoustic Night will follow on November 10, 2019.

The awarding ceremony of Benguet’s micro, small nd medium enterprise best and Cities and Municipalities Competitve Index (CMCI) will be simultaneously held on November 11, 2019 which will be followed by a jobs fair on November 12-13, 2019.

On November 14, 2019, the province will be conferring the coveted Environmental Awards to deserving individuals and groups aside from another round of mass wedding that will be done in the different municipalities on the same day.

The 2nd Adivay Golf Tournament, the pre-pageant for the Search for Mr. and Ms. Benguet and the newly introduced Senior Citizen Adivay Show will all be held on November 15, 2019 which will be followed by the parade of the Benguet Rodeo and Dumba ni Kabajo, Muay Thai invitational, opening of the Benguet Rodeo, Benguet cultural dance performances and high school musical battle of the bands will all be held on November 16, 2019.

The Shinshin Karatedo Adivay championship, Kapeterya, mountain bike fun race and the closing of the Benguet Rodeo and Dumba ni Kabajo will be done on November 17, 2019 which will be followed by the newly introduced mascot competition and the grand opening of the agri-tourism fair will be conducted on November 18, 2019.

On November 23, 2019, the founding anniversary of the province, among the activities that have been lined up for the busy day include civic and float parade, cañao, invitational arnis tournament, football kasibulan, Milsim airsoft invitational, pinka-best fruit and vegetable and battle of the bands.

The trade fair will formally be closed on November 24, 2019 aside from the Cordillera variety show, invitational arnis tournament, football kasibulan wherein the activities will be capped by the closing of the agri-tourism fair, Thanksgiving Day and variety show.

On November 25-26, 2019, there will be a bilateral tubal ligation that will be provided by the health experts to females wanting to undergo the same.

There will also be the traditional Environmental forum, fun shoot and Employees Night on November 29, 2019 while the taekwondo invitational, and 4×4 off-road challenge will be held on November 30, 2019.

The month-long activities will be capped by a mixed martial arts competition on December 14, 2019 while the closing ceremonies will be announced later.

By HENT
2019 ADIVAY FESTIVAL LAUNCHING – Benguet provincial officials led by Gov. Melchor D. Diclas discuss the numerous programs and activities that had been lined up by the provincial government for the month-long celebration of the 119th founding anniversary of Benguet and Adivay festival. Photo by: Rosalia T. See